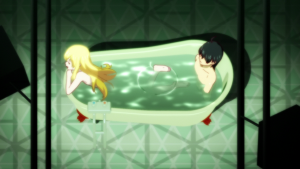 Nisemonogatari episode 4 is the third bathing scene in the Monogatari anime series and specifically the second in the Nisemonogatari season.

Koyomi Araragi takes a Bath in a Clawfoot Slipper Bathtub after arriving home. In the tub, he is leaning back and resting both his arms on the sides when Shinobu Oshino appears naked out of his shadow and exploding tons of Rose Petals all over the entire bathroom. For the first time seen in the series, Shinobu talks and takes Araragi by surprise causing him to slip in the Bathtub. Shinobu walks over to the Bath Stool and sits down to take a Shower.

While Shinobu is sitting under the Shower Head showering, she continues to talk with Koyomi and brings up that he still has broken hand cuffs on him that he can't get off. Shinobu gets up from sitting on the stool and jumps over to him doing flips and lands right in front of the tub. She pulls the hand cuffs off of Koyomi's hands and then eats them. Shinobu then sits on the outer rim of the tub and continues to talk with him while Koyomi is leaning back in the tub with his legs spread. Shinobu tells Koyomi that she would like to try using Shampoo in her hair.

Koyomi is then seen outside of the tub behind Shinobu scrubbing her hair with shampoo as she sits on the bath stool with the shower running on her. Koyomi sees through the Mirror that her reflection isn't showing as she is a vampire and then picks up the shower head to rinse the shampoo out of Shinobu's hair. After he rubs some Conditioner in her hair, he is then back in the bathtub sitting in the center resting his right arm. Shinobu is now wearing a Towel on her head and washing her arms on the bath stool and as she has Soap all over her body starts washing her legs while curling up and then sits back up to scrub in between her toes.

Afterwards, Shinobu turns the shower back on to rinse the soap off and then she takes the towel off her head. She slowly walks over and gets into the tub with Koyomi and leans against the other end of the tub where she then says that its been around 400 years since the last time she had a bath. While Shinobu is laying with her butt sticking out of the water, she looks back at Koyomi and tells him that he must be a pervert for looking at a young girls body so intently making him embarrassed and trying to cover his face while Shinobu kicks her legs back and forth Splashing. Shinobu then sits to the side of the tub with her legs crossed while Koyomi dunks his head underwater to hold his breath and ends up losing his air and Blowing Bubbles. Both Koyomi and Shinobu sit right next to each other against the side of the tub with Koyomi resting his arms on the rim while Shinobu is stretching her arms and then puts her hands behind her head.

The lights turn on and Koyomi's youngest sister Tsukihi Araragi opens the door on them while they're in the tub because Koyomi was taking too long. Tsukihi sees Shinobu in the tub with him and closes the door giving Koyomi the chills. Tsukihi then returns with a butcher knife, but by that time Shinobu hides and makes it seem like Tsukihi was just seeing things. She then leaves but forgets to shut the door making Koyomi have to get out of the tub to close it. After closing the door, Shinobu appears back in the bathtub laying against the side crossing her legs and leaning them against the other side of the tub but Koyomi pushes them off to make room to get back in.

Koyomi and Shinobu are once again back in the tub together on opposite sides facing each other. Shinobu who was resting her arm puts it back into the water and scoops some water with her hand. She then curls her legs and leans back and has a fantasy of a post apocalyptic world where the bathtub remained and she and Koyomi are the only ones left and they remain together in the tub. Shinobu then kicks Koyomi in the stomach with her foot under the bathwater and moves forward putting her arms around Koyomi. Shinobu leans against Koyomi's chest and Koyomi then embraces her and pets her on the head ending the episode.

Most of the scene was completely redone for the Blurays and is visually different frame by frame than the original TV airing. One of the first things noticeable is that the Slipper Bathtub is shaped a little differently between the two versions with the TV version's being more long and narrow appearance while the Bluray changed it to be more shorter but wider. The censorship of the nudity in the scene between both versions is mixed as some shots are more revealing in the TV version while others are in the Bluray. One big difference is that the TV version featured clear bathwater showing most of Koyomi's body coming barely close to showing his genitals while Shinobu's body was most covered by bright lighting or having the shot more zoomed in. In the bluray version, the bathwater is murky and green not revealing any of Araragi from below his chest while the lighting that covered Shinobu was removed revealing most of her body such as revealing her buttocks and in some shots her nipples. The body structure was drawn a little different between both versions as well such as the Bluray making Araragi have a more skinny and less chiseled body and Shinobu having more skinny legs and a smaller and rounder butt.