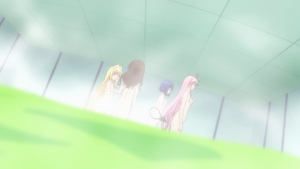 Ryoko Mikado is seen wearing a Bathrobe and Bath Slippers after some Off Screen Bathing when she finds Rito Yuuki and Haruna Sairenji have randomly warped into her mansion from one of Lala Satalin Deviluke's devices. Later on at night, Rito takes a Bath in his Ofuro's Unit Bathtub when suddenly, Lala activates a device from the Changing Room that temporarily remodels their ofuro to be larger and change their bathtub to a Bathing Pool. Rito then finds out that Lala, Haruna, Mikan Yuuki and Golden Darkness are all going to take a bath and hides in the bathwater while they are washing. Rito holds his breathe for a long time almost drowning until they all get into the bath so he can escape out the door. Before he can sneak out of the bath though, the device changing the bathroom malfunctions and turns it back into a normal ofuro again leaving all five of them crammed into a single unit bathtub where they discover that Rito was in the tub with them the whole time. Rito quickly gets out of the tub and tries to cover up but Golden Darkness gets angry at him for seeing her naked and uses her hair Weapons to attack him on his way out.

This bathing scene is an adaptation to the 76th chapter of the To Love-Ru manga series.