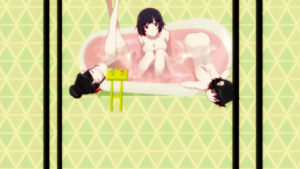 Tsukihi Araragi, Karen Araragi and Tsubasa Hanekawa share a Bath in a Slipper Bathtub together.

The preview at the end of last episode doesn't show actual footage of this bath scene but does mention it through a crude drawing of Tsubasa Hanekawa being given a Bubble Bath in a Flat Bathtub which is a significantly different scene than the one that happens in this episode.

This episode is an adaptation of the 26th chapter of the Nekomonogatari (White) novel.