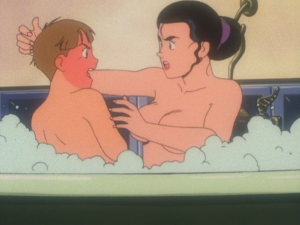 Uso Ewin who was kidnapped and handcuffed by the Zanscare Empire Lieutenant Lupe Cineau was stripped and put into a Bubble Bath in a Clawfoot Bathtub. While in the Bath, Uso is then freaked out when he sees Lupe Cineau walk into the bathroom naked and get into the tub with him. Uso then tries to escape the bathtub but then gets pulled back in by Lupe who then starts interrogating him by dunking his head in the water attempting to drown him. While Uso is being dunked in the water by Lupe, he tries to reach his arms around and ends up grabbing her breasts. Uso then manages to flip Lupe over and get some air but just as he attempts to get out of the tub, Lupe rises up and then they start wresting each other in the bathtub. After Uso headbutts her, he manages to successfully escape the bathtub and run out of the bathroom in a hurry with only time to get his underwear on. Lupe who quickly follows only puts a pair of panties on and a yellow Towel runs after him accidentally dropping her towel on the way out and requests the guards to get her some clothes to put on as she chases after him. After Uso manages to escape completely naked losing his underwear on the way out, Lupe mentions that Uso bit her breast during their fight in the bath.

This episode was first aired in Japan on October 15th, 1993.

On an official Gundam.info poll posted in December 2009 for best Gundam bath scenes, this scene tied with Turn A Gundam episode 36 for 6th/7th place with 1.82% votes.