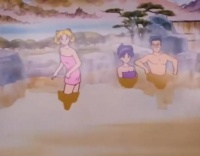 Mixed Bathing or Coed Bathing is when people of both sexes bathe together. Some older Onsens out in Japan's countryside have mixed bathing. While many male characters fantasize about the idea of being able to take Baths with girls, most mixed baths end up being disappointing to them and full of elders. Usually during mixed baths at onsen's everyone wears a Towel in the Hot Spring to maintain modesty in front of each other. A mixed bath in Japanese is called Konyoku (混浴).

Mixed bathing can also happen informally within' households. It isn't uncommon for a person to bathe with someone of the opposite sex who is significantly younger than them. Onsens and Public Baths don't have any problem with kids bathing in the opposite sexes side to be with their parent of guardian. It is also common for couples who are in a relationship to bathe together as a time of romantic bonding which can sometimes escalate to intimacy.

Sometimes when people of the opposite sex who aren't in a relationship end up in a situation where they have to bathe together, they often try to be considerate and be faced in the opposite direction and try to be distant from each other. There are also situations where a character may accidentally fall in or start using a bath that they didn't know was being used by the opposite sex.