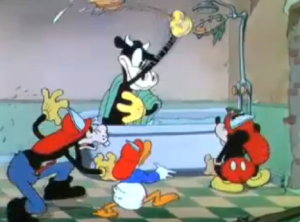 Mickey's Fire Brigade is an animated short in the Disney franchise that has a bathing scene in it.

Mickey realizes that there is a woman upstairs who needs saving. They find Clarabelle Cow locked in the bathroom taking a Bath in a Clawfoot Bathtub and singing to herself, unaware that the hotel is on fire. After Goofy unsuccessfully warns her through the transom, Mickey and Donald break the door down using Goofy as a battering ram. Clarabelle is alarmed and thinks that Mickey, Donald, and Goofy are kidnappers. As Clarabelle is screaming for the police and hitting them with her scrub brush, the three firefighters lift her bathtub, with Clarabelle still in it, and shove it out the window. Clarabelle sails through the air in her tub, and slides down a ladder to the ground. The three firefighters then land in the bathtub. The film ends with Clarabelle continuously hitting them with her brush before she is then arrested offscreen for assaulting fire rescue operators and calling them kidnappers.