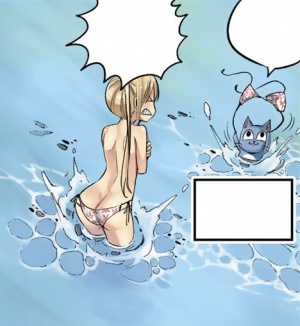 Lucy Heartfilia ends up Skinny Dipping in the Ocean from Swimsuit Loss.

This chapter was first released in Japan on October 16th, 2019 on the Weekly Shonen Magazine.

The events of this crossover are not covered in the Groove Adventure Rave or Fairy Tail anime series and are currently exclusive to the manga.