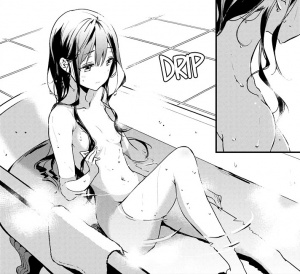 Aki Adagaki takes a Bath in a Clawfoot Bathtub while seemingly depressed.

This chapter was first released in Monthly Comic Rex sometime Before April 27th, 2015 which is when it was compiled into the 5th manga volume.

This scene was left out of the anime adaptation but if it did appear it would have been in episode 11.