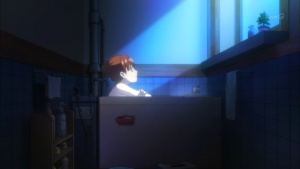 Akari Kawamoto is seen in her pajamas and drying her hair with a White Towel after an Off Screen Bath. She tells Hinata Kawamoto that the Bath is free and Hinata takes a bath in their Ofuro's Unit Bathtub in the dark while depressed. 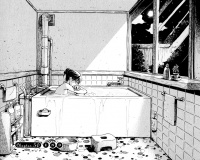 This scene is an adaptation of the 50th chapter of the March Comes in Like a Lion manga series.