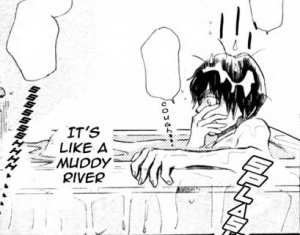 Rei Kiriyama wakes up in a Unit Bathtub after being unconscious in the Bath. He goes back underwater to think and comes back up.

This scene was adapted into the 18th episode of the anime series. The anime version has more shots showing more of the Ofuro and more movement from Rei.

This chapter was compiled into the fourth manga volume. The original serialization of the chapter in Young Animal was released sometime before April 9th, 2010.