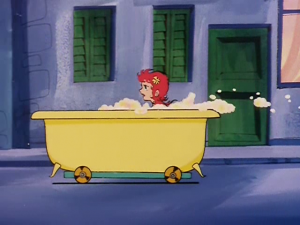 Chou has a Shower scene. Later on he rigs Megu Kanzaki's Clawfoot Bathtub with wheels just before she comes home to take a Bubble Bath in it. As she has a Bath in it, the tub starts shaking and then rams out of the bathroom wall and automatically drives through the street while Megu is still in it naked where a few people end up seeing her. As it bumps on a corner, Megu drops her bar of Soap. Non Hibiki who happened to be around, uses some magic to get a Swimsuit over to Megu. After she gets it on, all the bathwater is out of the tub which it then rams into Non, getting her into the tub as it continues along leading to Chou's lair.