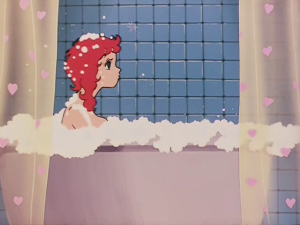 Megu Kanzaki has a Furo scene where she is first seen taking a Bubble Bath in a Flat Bathtub and then has a Shower. After she weighs herself on the bathroom scale in a Towel and then gets Peeped at by Rabi Kanzaki, which causes her to accidentally drops her towel.