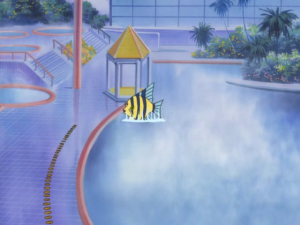 Asuna Kagurazaka bathes in a Public Bath while Wearing a fish costume.

This episode first aired in Japan on January 5th, 2005.

This scene does not appear in the original manga and is exclusive to this anime adaptation. It would have appeared in chapter 1 if it was in the manga.