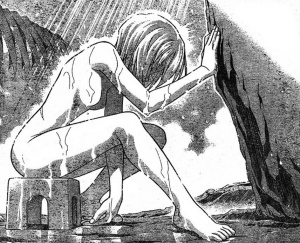 Ako Izumi takes a Shower of Angst when she finds out that the boy she loves doesn't actually exist and gets comforted by Akira Okochi.

This chapter first released in Japan in Weekly Shonen Magazine sometime before September 17th, 2009 which is when it was printed in the 27th manga volume.

This scene was not covered in the anime adaptation or any of it's OVA follow ups.