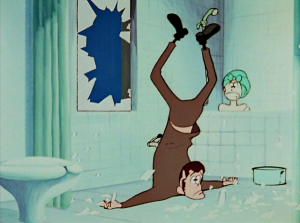 Lupin III episode 17 is the 3rd bathing scene in the Lupin III anime series and the final one in it's first series.

While riding a deflating balloon, Arsène Lupin III falls into the window of an apartment building which ended up being the bathroom while a woman was taking a Bath. Being mad at Lupin for accidentally Peeping at her, she throws a Bath Bucket at him. Daisuke Jigen who is still riding the balloon, flies up the building where a mother and child are seen bathing and another floor shows a lady in a Towel brushing her hair who finished Off Screen Bathing.