"Showers are fine, but there's nothing like a bath"
~Lucy Heartfilia (Fairy Tail episode 221)

Lucy Heartfilia is the leading female character from Fairy Tail.

Lucy lives in an apartment in the city of Magnolia which has an Ofuro with a stone Undermount Bathtub. Being a member of the Fairy Tail guild, she has access to the building's Shower Room and later the newer building's Public Bath. She also likes to visit Magnolia's public bath every once in a while.

When she was young, she lived in a mansion that had a golden Bathing Pool. After the Tartarus arc, Lucy moves to the city of Crocus into a new apartment for a short time that has a Slipper Bathtub (which is a Clawfoot in the manga and Flat Bathtub in the anime) but ends up moving back to her old apartment in Magnolia sometime after reviving the Fairy Tail guild.

She is shown to always enjoy taking Baths and Showers and has them routinely almost every morning and night. She likes baths more than showers and prefers big baths like Bathing Pools rather than small normal sized Bathtubs. In the anime adaptation, Lucy often wears a Towel while in the bath at her house. When she was young, she would summon her celestial spirit Aquarius to play with her but it would get her mad instead. She also bathes alot with one of her celestial spirits named Plue quite often and sometimes even Gemini. Lucy is strongly against the idea of Mixed Bathing and being seen naked by males despite situations always happening where she ends up naked in front of Natsu Dragneel and Gray Fullbuster to the point where its not interesting to them anymore.

File:Fairy Tail ch 4 1.jpg
Lucy stretching her arms while in her new bath.

At the beginning of the chapter, she is shown Stretching her arms and curling her legs while having a hot Bath in a stone Undermount Bathtub in the Ofuro of her new house in Magnolia. In the next panel she is out of the bath and is seen in the Changing Room in front of the Mirror wearing a Towel and drying her hair with another towel as she has a narrative explaining some nice qualities in her new house. Afterwards she leaps into the living room still in her towel only to find Natsu Dragneel and Happy the cat invading her house getting her angry and frustrated.

File:Fairy Tail ch 47.jpg
Lucy drying her hair after an off screen bath

She is seen coming out in pajamas and drying her hair with a Towel after taking an Off Screen Bath in her apartment's Undermount Bathtub right after Erza Scarlet, Natsu Dragneel and Gray Fullbuster's that they took together when they were spending the night.

She has a Furo Scene where she converses with Cana Alberona and then shares the Stone Bathtub with her which seems a bit small for both of them.

Lucy crying in the shower

She goes to take a Shower after losing her battle against Flare Corona. Apparently her shower lasts through at least the amount of time it took for the next 3 matches as she is seen still in the shower at the end crying.

Lucy takes a bath in an Onsen with Erza Scarlet.

She takes a bath in a magical ointment that ends up turning her invisible. 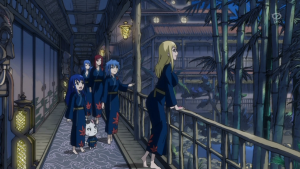 Lucy is seen in a Bathrobe along with Wendy Marvell, Charle, Levy McGarden, Erza Scarlet and Juvia Lockser after having an Off Screen Bath in an Onsen which was shown in the 4th OVA. 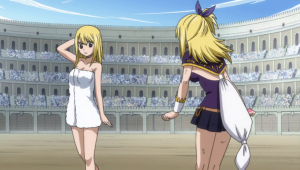 During a fight in the Grand Magic Games, Lucy summonds Gemini who transforms how she saw Lucy last which was in a Towel which Lucy comments that it was when she was in the Bath yesterday. This implies that Lucy took an Off Screen bath with Gemini in the Honeybone Lodge's Bathtub during the time frame of the night near the end of episode 155.

Lucy is seen Stripping to get ready to take an Off Screen Shower while talking to Wendy Marvell and Charle as they were getting dressed after they bathed off screen.

She ends up partially Skinny Dipping from Swimsuit loss.

She ends up Skinny Dipping from her Swimsuit getting cut off.