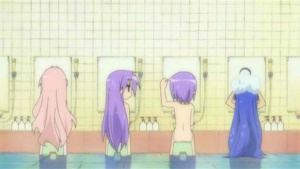 Konata Izumi, Tsukasa Hiiragi, Kagami Hiiragi, Miyuki Takara, Yui Narumi and Nanako Kuroi go to a Bath House to wash themselves off of sea water they got from going to the beach.