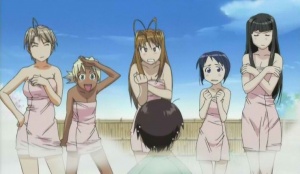 Keitaro Urashima falls off of a Mecha-Tama while Clothed into the Hot Spring that Mitsune Konno, Kaolla Su, Naru Narusegawa, Shinobu Maehara and Motoko Aoyama are bathing in. Keitaro is seen trying to apologize to Shinobu who is running away but gets hit by the wind blast from Motoko's sword, then gets kicked by Kaolla Su and then finally punched into the sky by Naru.

This opening first aired in Japan on April 19th, 2000 at the beginning of the first episode and remained the opening credits for all 25 episodes. 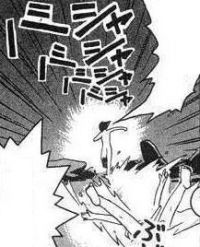 There is no manga version of this scene and is exclusive to the anime. The moment in the opening where Shinobu Maehara is seen running away from Keitaro Urashima after being accidentally peeped at seems to be inspired by chapter 2 of the manga series where this same moment happens but in the manga she is butt naked and ends up trampling over him when running away rather than wearing a Pink Towel and running in the opposite direction of him.