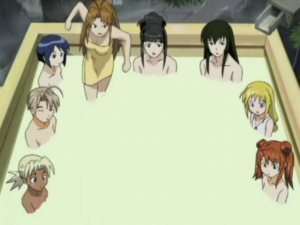 Motoko Aoyama ends up having her bath in a Hot Spring with Keitaro Urashima interrupted by Tsuruko Aoyama who ends up having a Sword battle each other. Motoko who has her towel on ends up losing to Tsuruko who is only in a small robe and panties. The fight caused because of Tsuruko finding out that Motoko was lying to her about marrying Keitaro from listening to their conversation. Later on, Tsuruko Aoyama and Naru Narusegawa take a bath in a Hinoki Bathtub and get interrupted by Motoko and Keitarou who end up in the bath while wearing ninja outfits. At the end of the episode, all of the girls are seen bathing in the hinoki bathtub together.

This episode never aired on TV and was exclusive to home video releases of the series which first released in Japan on May 2nd, 2001.

All of the bathing scenes that occurred in this episode are exclusive to the anime and don't happen in the manga.