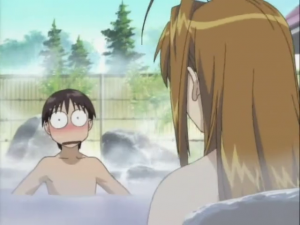 When Keitaro Urashima finds that the Hinata Apartments has a Hot Spring he decides to start bathing in it while only wearing a Towel. In the bath he ends up meeting Naru Narusegawa who doesn't have her contacts on and mistakes Keitaro for her friend Mitsune Konno. When Naru finds out that shes actually bathing with a guy, she freaks out dragging Keitaro around the Hot Spring and eventually kicking him into the changing room where Mistune is shown in only a towel intending to take a bath but then helps Naru chase Keitaro out instead. Later on after the girls are aware that he is the new manager, Keitaro does various chores around the house to try to make them appreciate him while one of them was cleaning the outdoor bath. While cleaning the outdoor bath he is daydreaming that Naru is coming out in only a towel likely to get ready to bathe. At the end of the episode Keitaro is seen bathing in the newly found males bath of the Hinata Apartments which is a wooden bathtub on a balcony on the side of the building. Keitaro looks out the balcony and is able to see the Hot Spring which Naru happens to be bathing in at the time. She gets mad at Keitaro for Peeping at her and manages to hit him from that far away sending him flying off. 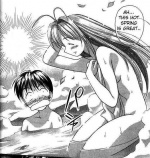 This episode is an adaptation of the first chapter from the Love Hina manga.