"I don't feel comfortable taking a bath by myself. I always had a bunch of maids with me when I took a bath"
~To Love-Ru chapter 6

Lala Satalin Deviluke is the main female character of To Love-Ru. She is a lover of baths and being a naive alien princess from the planet Deviluke, she lacks modesty and doesn't have any problem being seen naked by anyone while she is bathing. After an accidental proposal to her by Rito Yuuki, Lala remains living at the Yuuki residence where she has most of her baths, sometimes with Rito's sister Mikan Yuuki and often has the habit of walking around the house only wearing a Towel after them and sometimes dropping it without any care. Lala along with many other female friends at Rito's school such as Haruna Sairenji often bathe together at Public Baths and Onsens.

Lala meets Rito Yuuki as she transported naked into his bathtub where he is shocked and mesmerized by her naked body. While first seeing Lala naked he accidently lands his hands on Lala's breast while Lala seems to not care. Being freaked out over this surprise, Rito runs out of the bath in a Towel and tells his sister Mikan Yuuki that there is a naked woman in their bathtub, but Lala is gone when he shows her making Mikan embarrassed by thinking her brother fantasizes of woman in while in the bath. When Rito goes back to his room he see's Lala on his bed wearing a tan towel.

Lala is seen taking a Shower at Rito Yuuki's house. Rito tries to sneak into the bathroom to grab her breasts as part of a Deviluke tradition to break off his forced engagement with her but is caught by Peke in the changing room which then Lala comes out. Afterwards, she is seen wearing a Towel and tapping on a bottle of Milk confusingly.

During all of Ren's training moments, it comically cuts to bathing scenes saying that the situation is too violent to be shown on TV. Some of them are recycled animation from episode 5. 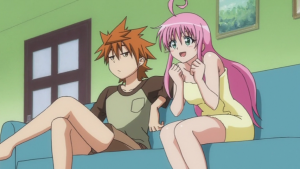 Lala watching TV in a towel

Lala is seen watching TV while wearing a yellow Towel after bathing Off Screen.