Mezzo Forte is an anime series created by Yasuomi Umetsu and produced by the studio Arms. It is a spiritual sequel to Umetsu's Kite series and is part of the same universe.

Momomi Momoi takes a Bath and a Shower at the same time.

There is a Shower scene. 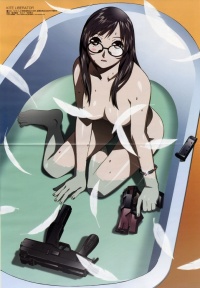 Poster of Monoka in the bath

There is a poster of Monaka Noguchi taking a Shallow Bath in an unknown type of Freestanding Bathtub with two guns in the water and a clip laying on the rim of the tub. The feathers that come from the ball she usually uses to leave her mark after assassinating her targets are seen floating around with some conveniently covering her breasts and crotch.