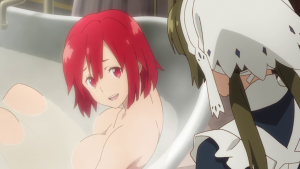 Izetta is striped when she wakes up by the Servant Lotte and is given a morning Bath by her in a Clawfoot Slipper Bathtub. She is helped by having a Shower Head run on her. She almost gets scrubbed with a Sponge but she ends up having to save the servant by standing up and leaning over the edge of the tub to stop a statue from falling and instead hits Izetta on the head.