Is the Order a Rabbit?/Episode 01 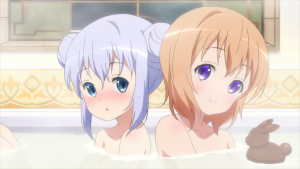 Chino Kafuu and Cocoa Hoto take a Bath in a Clawfoot Slipper Bathtub.

Main article: Is the Order a Rabbit?/Chapter 2

In the original manga version, the bathtub was a Unit Bathtub instead of a Clawfoot Slipper Bathtub. The Rubber Duck-like bunny toys were also not present in the manga version.