Is the Order a Rabbit?/Chapter 8 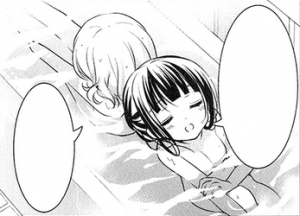 Sharo Kirima and Chiya Ujimatsu share a Bath in Chino Kafuu and Cocoa Hoto's Unit Bathtub to warm up after being out in the rain. Afterwards Chino and Cocoa bathe in it together Off Screen and then Rize Tedeza takes a bath in it by herself using cocoa bath salts.

This chapter was first released on February 19th, 2011 in Manga Time Kirara Max. It was compiled into the first manga volume released in Japan on February 27, 2012.

Main article: Is the Order a Rabbit?/Episode 03

In the anime adaptation, the Unit Bathtub was changed into a Clawfoot Slipper Bathtub.