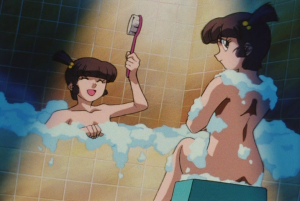 There is a Furo scene where Emi Hanner is taking a Bubble Bath in an Undermount Bathtub and Yumi Hanner is sitting on a Bath Stool washing herself with Soap. They yell to confirm that they have cleaned every bath & toilet on the ship.