This is a list of non-bathing scenes in the Inuyasha franchise such as unused bathing facilities and Off Screen Bathing implications. 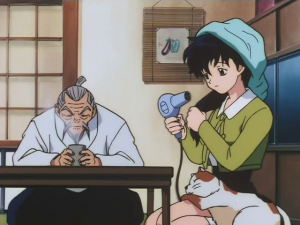 Kagome Higurashi is seen using a Hair Dryer to dry her hair after taking a Bath in the previous episode.

Later on when Kagome is trying to assist Inuyasha in the fight against Yura of the Hair, Yura insults Kagome's hair by saying it's not as pretty as Inuyasha's which gets Kagome angry and tells her that she uses Conditioner on her hair everyday. In the English dub, Kagome's line is about her not trusting Yura's opinion on hair because she's from a world that doesn't have Shampoo.

This episode first aired in Japan on November 6th, 2000.