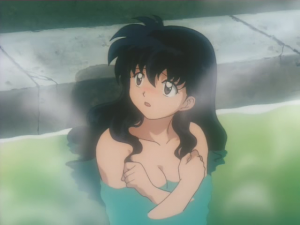 Inuyasha episode 58 is the fifth bathing scene in the Inuyasha anime series.

Kagome Higurashi wakes up naked in a Bath of sake after being kidnapped. Inuyasha manages to find her and breaks down the door to rescue her accidentally seeing her naked. At first she is happy to see him but then realizes she is naked and covers her breasts and sinks into the bath. When she see's that he is weak, she gets out of the bath to see what is wrong while not bothered she is naked in front of him. When she does find that Miroku is shrunk and hiding in his hair watching she gets mad.

This episode is an adaptation of the 82nd chapter of the Inuyasha manga series and actually happened earlier in the series before Sango was introduced. In the manga, Kagome's nipples are visible, the bath is shallower and there are animals chopping up vegetables into the bath depicting a more obvious intent to that she is being prepared to be eaten.