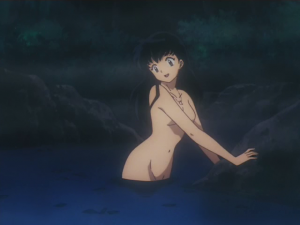 Inuyasha episode 16 is the second bathing scene in the Inuyasha anime series.

Kagome Higurashi gets into a Hot Spring while not knowing that Miroku is bathing on the otherside of it. She tells Inuyasha not to peek at her, while Inuyasha replies back saying that he wouldn't want to anyways. While Kagome is relaxing in the hot spring she sinks her head into the water and thinks to herself. She hears a noise and begins to scream, Inuyasha comes out into in the spring to try to fight whatever he thinks is attacking her but it just seemed that she was startled by monkeys. She stands up in the hot spring still naked and hits Inuyasha in the head with a big rock for peeking at her.

This episode first aired in Japan on February 19th, 2001.

This episode is an adaptation of the 51st chapter of the Inuyasha manga series.