Ikkitousen chapter 3 is the first bathing scene in the Ikkitousen manga series.

While Koukin Shuuyu is taking a bath by himself in a Bathing Pool, Hakufu Sonsaku comes in and climbs into the bathtub with him and she falls asleep.

"Master Koukin? Your bath is ready."
~

This chapter was first released on June 26th, 2000 in Comic Gum. In October 2000 the chapter was printed and published by Wani Books in the first manga volume released in Japan. The scene was officially translated and released in North America in volume 1 published by Tokyopop on April 6th, 2004. 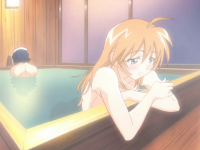 This bath scene was adapted in the 1st episode of the anime. The changes made in the anime version aside from the anime altering the Bathing Pool into a Hinoki Bathtub, are that it takes place at night and Hakufu walks into the bathroom clothed at first and is shown Stripping before she enters the tub rather than just already being naked like in the manga. The anime also has a conversation in which Koukin explains the meaning behind Hakufu's sacred bead to her until she falls asleep.