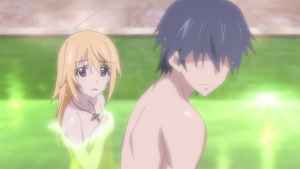 The original TV airing had lots of steam covering up Charlotte Dunois naked body and nipples. The scene was released uncensored on the Blu-ray release.

This episode first aired in Japan on February 24th, 2011.