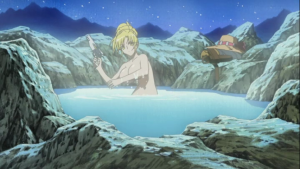 Grenadier opening credits is the first bathing scene in the Grenadier anime series.

Rushuna Tendo is shown bathing in a Hot Spring. It shows her sensing someone nearby so she grabs her Gun while Covering her breasts. Realizing that it is just her friend Yajirou Kojima, she lowers the gun and smiles in relief. After Yajirou is kicked into the Hot Spring she is bathing in by Mikan Kurenai, Rushuna is seen laughing.

The scene first aired in Japan on October 14th, 2004 on WOWOW. It is shown at the beginning of all 12 episodes in the series.