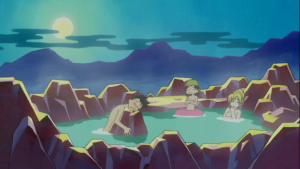 Grenadier ending credits is the third bathing scene in the Grenadier anime series.

Rushuna Tendo goes Skinny Dipping in a Hot Spring and Mikan Kurenai jumps in wearing a Swim Ring and joins her. At the end, Yajirou Kojima rises up from Underwater surprising them and then leans against a rock revealing that he was bathing with them the whole time.

This ending theme for appeared at the end of episode 1 which was released on October 14th, 2004 and ran at the end of all 12 episodes of the series.