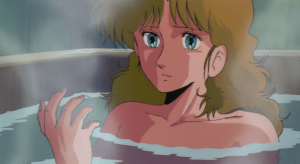 Time Stranger is an anime film in the Sengoku Majin GoShogun franchise that has a bathing scene.

Remi Shimada attempts to take a Shower in a Clawfoot Bathtub and shower combo in a Hotel Bathroom but the water runs out annoying Remi complaining that it happened again. Later on, she wakes up from a nightmare and hears that the shower is running in the bathroom but then starts hallucinating that the shower and sink are both flooding with Blood freaking her out and causing her to outside only to find that nothing was wrong and finds that the bathroom was back to normal when turning the shower back on. Later on, she takes a Shower and comes out wearing a blue Bathrobe. Right before the climax of the movie, she takes a Bath in the tub.