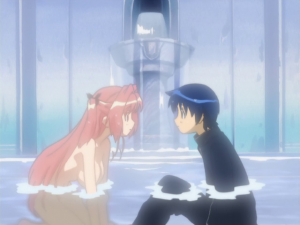 There is a Bath scene with Miharu Sena Kanaka. Kirie Kojima has some Off Screen Bathing and gets accidentally peeped on by Yukinari Sasaki as she is drying off. Yukinari gets knocked into his Unit Bathtub while still clothed and ends up in the world of Seiren in Miharu's Bathing Pool during her bath.