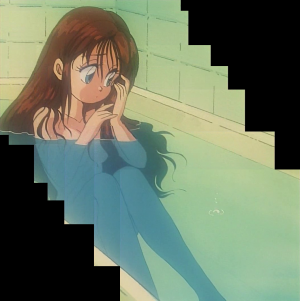 Rei Kuki has Raizou Kuki's minions prepare her a Floral Bath for her in a Clawfoot Bathtub on the outside balcony. Everyone then gets called into the lab for a meeting but Raizou was absent and only talking to them through a radio. Rei then gets angery when she finds that he is taking a Bubble Bath in the bathtub that she was planning to take a Bath in. He has a pink Towel on his head and bathing in the same fashion she does in the show's ending credits, washing his arms and Leg Stretching.

Later on in the episode, Ibuki Heike is seen taking a Bath. The episode ends with Rei in a bubble bath.