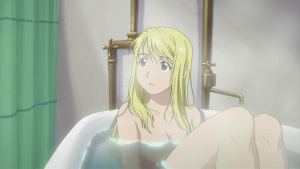 Winry Rockbell has a bath in Rose's Clawfoot Bathtub while the Shower Curtain is closed. At the beginning Winry stretches her arms out mentioning that she hasn't had a bath in a long time. On the other side of the curtain Rose comes and drops off some clothes for Winry. While still laying in the bathtub Winry says that she is worried about Ed and hopes that he is okay. Later on the episodes eye-catch shows Winry in a bath poking at a Rubber Duck.

This episode first aired in Japan on February 14th, 2010. It was first shown in English on Cartoon Network's Adult Swim block on May 8th, 2011. 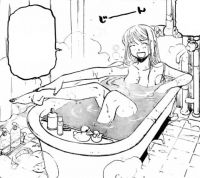 This scene is based off of the 81st chapter of the Fullmetal Alchemist manga series.