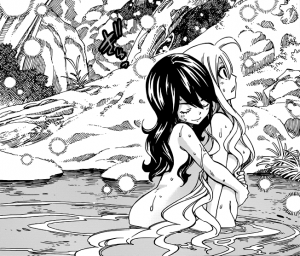 Mavis Vermillion and Zera wander away from the campground where the group they were traveling with was at and Zeira accidentally falls into a lake. While Zeira's clothes were wet she had an idea and starts Stripping and decides to go Skinny Dipping and tells Mavis to join her. Mavis then jumps into the water naked with her and starts Splashing her. Zeira tells Mavis that she sees fairies and then hugs her from behind telling her that they are in their hearts.

Opening theme version of the scene

A homage to this scene was shown in the anime's 22nd opening theme as one of the many scenes that would later happen during the story arc it was for. The only shot shown in the opening from this bathing scene was of Zera hugging Mavis.

The anime did adapt the scene in episode 270 but Mavis and Zera ended up wearing Swimsuits during it making it not be a Skinny Dipping scene in that version and instead just a normal swimming scene.