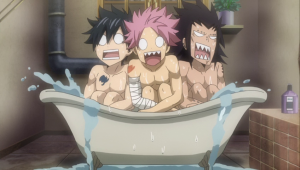 At a Christmas party held at Lucy Heartfilia's apartment, Erza Scarlet hosts a game called the "Guild Master" game and one of the results ended up forcing Gray Fullbuster, Natsu Dragneel and Gajeel Redfox get into a Bath together in the apartment's new Clawfoot Slipper Bathtub. The bath lasted for the duration of a series of events where the other attendees were forced to go out in an indecent state doing embarrassing acts in public and by the time they were finished, the three guys were still crammed in the tub barely conscious in awkward positions.

This OVA was first released on December 16th, 2016 as an extra to the special edition of volume 59 of the manga.

This OVA is an adaptation to the 41st omake chapter in the Fairy Tail manga series but the bath scene specifically is exclusive to the anime and doesn't appear in the manga. 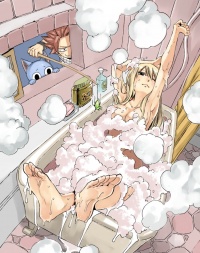 Hiro Mashima artwork possibly based off this OVA's bathroom remodel.