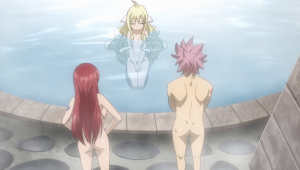 In the Fairy Tail guild's Public Bath, the girls Levy McGarden, Cana Alberona, Juvia Lockser, Mirajane Strauss, Lisanna Strauss, Charle, Wendy Marvell, Erza Scarlet and Lucy Heartfilia are having a Furo session sitting on Bath Stools and washing themselves with Soap and Shampoo. Mavis Vermillion is having a Bath in the Bathing Pool stretching her arms. When Erza learns that Mavis can't actually feel the warmth of the bathwater since she is a ghost so Erza calls Natsu Dragneel into the baths to heat the bath with his fire magic which he instantly shows up naked scaring Juvia, Levy, Lisanna, Wendy, and Charle out with Cana and Mirajane casually following. Lucy who puts on a Towel and attempts to escape, accidentally slips on a bar of a soap and bumps into Erza with them both falling into the bathwater as Natsu heats it up to an extremely hot temperature that they could barely survive in. Afterwards Mavis is satisfied with the bath and Lucy who is recovering from the intense heat stands up right in front of Natsu and yells at Natsu and telling him to cover up when Mavis points out that Lucy isn't covered up either.

After Mavis leaves, Lucy, Erza and Natsu hear Warrod Sequen and see that he is using the bath claiming that he heard that the guild had a Mixed Bath that he wanted to try with Lucy saying that information is incorrect. Lucy is then seeing joining Warrod in the bath covering her breasts while Natsu gets his back scrubbed by Erza in a furo session and all of them have a conversation where Warrod mentions a treasure Mavis hid 100 years ago. By the end of the conversation, Natsu and Erza switched positions where he is washing her back and gets excited about the treasure and starts punching randomly accidentally hitting Erza getting her angry and hurting him back off screen.

This OVA was first released on November 25th, 2016 as an extra to the special edition of volume 58 of the manga. 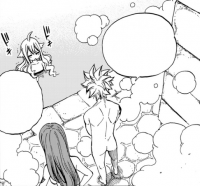 This OVA is an adaptation to the 37th omake chapter in the Fairy Tail manga series. In the manga, Mirajane Strauss kneels down and covers her breasts when Natsu Dragneel shows up instead of Juvia Lockser being in that position. In the anime, Mirajane embarrassingly leaves while trying to keep her composure alongside Cana Alberona who also has more screen time in the anime version. Any scene that happened after Mavis Vermillion finished is completely anime original with the second bathing scene involving Warrod Sequen being a loose adaptation of chapter 355's bath scene since the anime adaptation of it in episode 233 was drastically different.