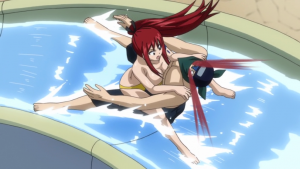 At the Ryuzetsu Land waterpark, Ichiya Vandalay Kotobuki ends up Skinny Dipping in the Swimming Pool after his speedo fell off when Erza Scarlet kicked him far off making him unconscious. Sometime after, Juvia Lockser ends up having a Dream Sequence of Gray Fullbuster and Lyon Vastia wet and naked loving each other. Near the end when lots of shenanigans are happening, Erza Scarlet's bikini ends up being dethreaded while going down the Waterslide with Jellal Fernandes. Her top ends up being fully removed and ends up partially clothed skinny dipping holding herself close to Jellal to cover up but ends up making him nosebleed while her bikini bottom is still being dethreaded going down the slide. After Natsu Dragneel destroys the park, Erza is seen with her bikini bottom not all the done yet sitting no Jellal's face and covering her breasts while most of the people from the guilds are seen unconscious with Ichiya, Ren Akatsuki, Hibiki Lates, Eve Tearm, Max Alores seen naked, Jenny Realight bottomless and Lucy Heartfilia topless implying that they may have accidentally ended up skinny dipping Off Screen from the big splash that was made.

This OVA was an adaptation of chapter 298 of the Fairy Tail manga however all the swimsuit loss moments in this that qualify it as bathing scene were anime original but the manga still implied the off screen skinny dipping at the end.