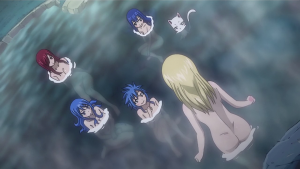 While Natsu Dragneel, Gray Fullbuster, Jet and Dory are out swimming in the Ocean, Gray randomly loses his Swimsuit not having any issues. To continue some training, Gray who is still Skinny Dipping in the ocean decides to practice his ice magic by freezing it which Natsu and the others break as part of their training.

Later that night after the girls got drunk, they are apparently all back to normal as they bathe in the Onsen at the resort they are staying in. While Wendy Marvell, Erza Scarlet, Lucy Heartfilia, Levy McGarden and Charle are already in the Hot Spring, Lucy calls over Juvia Lockser to come in who is shy and hiding by the stairs in a Towel. Mavis Vermillion who was watching over the girls while they were bathing glanced over at Erza and Lucy's breasts and felt discouraged by the size but then saw Wendy and Levy's smaller chests and felt better.

While Lucy leaned up to the edge of the hot spring and looked at the night sky, Levy who was looking at her asks about Natsu and tries to tease her which causing her to stand up in front of everyone and tell the story of how she tried to get back at Natsu for always barging into her house. When it shows the times that Natsu barged into her house, one of them was when she was attempting to take a bath and walked into the bathroom naked with a towel to see that Natsu and Happy were in her bathtub bathing.

When Lucy finishes her story it goes back to the girls bathing in the Onsen when on the males side Natsu, Gray, Jet and Droy are attempting to peep on the girls side while Happy walks by and watches them attempt. Erza sense that someone is present and throws Kunai that she ex-quipped in the direction frightening the girls causing Lucy to wrap up in a towel while Wendy covers her chest, Levy gets an annoyed look on her face and Juvia stands up angrily for accusing them of thinking Gray would do something like peek on them. When Erza finds out that its only Natsu and the guys she becomes ok with it and walks over to ask if they want to join them but Lucy strongly rejects that idea while trying to cover Erza's breasts from the audience with her hand. Over on the males side, Natsu, Gray and Jet have bandages on their heads where they got hit and Droy has a bandage on his butt.

After the ending credits an extra scene is shown where Mavis is seen relaxing in the hot spring after everyone has left and then stands up to talk to the audience.

This OVA was first released in Japan on November 16th, 2012.

The advertisement for this OVA shows some scenes from the original manga version of this scene in chapter 261. 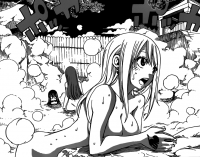