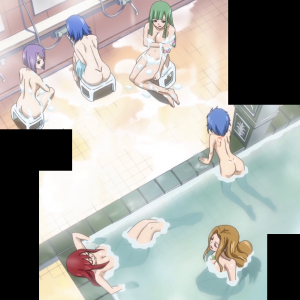 Lucy Heartfilia looks through a hole in the attic of the Fairy Hills dormitory that ends up being to the dorms Public Bath. In the bath, Erza Scarlet and Evergreen are in the Bathing Pool while Levy McGarden, Bisca Mulan, Juvia Lockser and Laki Olietta are outside of the bath, washing with Soap.

Later on, while the guys are hidden underneath the swimming pool at the Fairy Tail guild, they try to see if they can spy on Mirajane Strauss while she goes swimming but it ends up being Makarov Dreyer and then as he accidentally loses his swimsuit and ends up Skinny Dipping, the guys become disgusted and end up causing alot of damage to the pool. 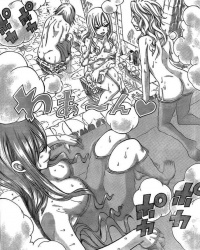 The OVA was an adaptation of the 15th Omake. Evergreen and Laki Olietta were not in the original manga version of the scene and were added in the anime version. Also, rather than an Undermount Bathtub which was seen in the manga, the anime changed it to a bathing pool. The secondary side plot involving the male characters at the guild's Swimming Pool that resulted in Makarov Dreyer's Skinny Dipping scene was exclusive to the anime version.