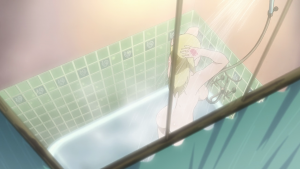 Fairy Tail: The Phoenix Priestess is an anime film in the Fairy Tail franchise that has a bathing scene.

Early in the film after finishing a job, Lucy Heartfilia tells Natsu Dragneel and Happy that she is going to go home real quick and take a Shower but ends up meeting Eclair and Momon on the way and takes them to the guild instead preventing her from taking that shower.

Later on when Lucy and her group go with Eclair as part of a mission they stop in the city of Rose Garden where she takes a Shower behind a Shower Curtain in a Clawfoot Bathtub shower combo in her and Eclair's room in Hills Hotel. When drying off in a white Towel she offers Eclair if she wants to take a shower to but then the power gets shut off and they start getting attacked. Lucy and Eclair jump out of the hotel and escape through the streets while she is still wearing a towel. After all the commotion, Lucy accidentally drops her towel in front of Natsu and Gray Fullbuster mid conversation without even realizing it. One of the trailers for the movie shows the part where Lucy is running in the streets in a white towel with Eclair while they are being attacked.

The trailer for the film shows the scene of Lucy running through the streets in a towel with Eclair.

Early concept art of this scene

While the events of this film aren't covered in the manga series and are only in this anime film, a prologue one-shot titled Fairy Tail: The Phoenix Priestess - Hajimari no Asa showed some concept art for the film at the end of it where one of the artwork is of Lucy Heartfilia wearing a towel after a Shower which is a scene that appears to be vastly different than the one that made it to the actual movie. Unlike the version in the movie, Lucy is wearing a towel on her head after getting out and a shadowy figure appears to have been following her while she was showering. Another difference is the bathroom's design which seems to resemble an Ofuro since there is a built-in bathtub that appears to be filled rather than the western style bathroom with a clawfoot tub shower combo that was in the movie.