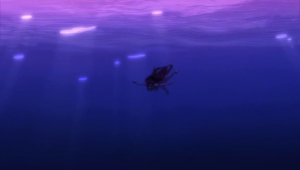 Fairy Tail: Dragon Cry is an anime film in the Fairy Tail franchise that has a bathing scene.

Juvia Lockser worries about what Gray Fullbuster is doing and has a Dream Sequence where Gray is bathing with Erza Scarlet and being asked to wash her back.

Later on, Charle transforms into her human form and during the transformation sequence she is naked and steps on a water ripple.

During a fight between Erza and Swan, Erza jumps underwater in a Lake and uses her ex-quip to change armor briefly making her naked in between the transformations where she is Skinny Dipping. She does this again after that fight when a bunch of fourth generation dragon slayer soldiers surround her.

The events of this entire film are not in the manga and are exclusive to the anime continuity.