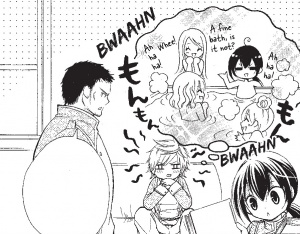 Wendy Marvell mentions that she takes Baths with her female friends to someone who thinks she is a guy and they have a Dream Sequence of a male version of Wendy having a Bath in a Bathing Pool with many unnamed females casually talking with them.

"A fine bath, is it not?"
~Wendy Marvell (dream sequence male version)

This chapter was released on June 3rd, 2015 in Nakayoshi.

The Fairy Tail anime series does not cover any of the events of the Fairy Tail: Blue Mistral spin-off so this scene did not get animated and is exclusive to the manga.