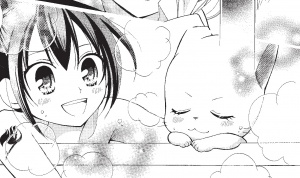 Wendy Marvell and Charle take a Bath together at Yoshino's house while spending the night. Yoshino let them use the bath first and quickly left to get some Soap for them but finds that they were already in the bath and finds a letter that was written for Wendy.

This chapter was released on September 3rd, 2014 in Nakayoshi.

The Fairy Tail anime series does not cover any of the events of the Fairy Tail: Blue Mistral spin-off so this scene did not get animated and is exclusive to the manga.