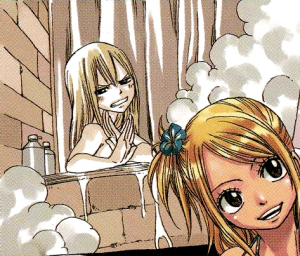 In the "Whisper Matsuki's Love Love Talking!!" segment exclusive to the special edition, Matsuki who is interviewing Lucy Heartfilia asks if she would sign a collection of Peeping photos that he bought of her where one of them is of her taking a Bath in her apartment's Undermount Bathtub. She gets angry and tries to make him to tell her where he got them but the interview instead ends. In the photo Lucy seems to be aware that she is being photographed and has an angry expression on her face while putting her hands in an X shape.

This extra manga segment did not get adapted into the anime series and remains exclusive to the manga series.