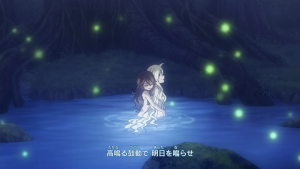 Zera and Mavis Vermillion are shown Skinny Dipping together at night in a Lake. Zera is seen Hugging a surprised Mavis while fireflies light up the night sky.

This opening first released on January 9th, 2016 during as part of episode 266 and showed at the beginning of all episodes up to 275. 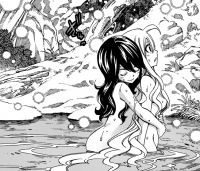 Manga version of the scene

The anime did adapt the scene in episode 270 but Mavis and Zera ended up wearing Swimsuits during it making it not be a Skinny Dipping scene in that version and instead just a normal swimming scene.