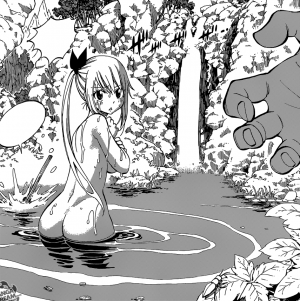 In an alternate stone age setting, Natsu Dragneel and Happy ends up meeting this incarnation of Lucy Heartfilia while she is Skinny Dipping in a Pond thinking she is a boar that they were hunting. Lucy picks up the spear that Natsu missed her with and throws it back at him and runs out of the water but Natsu still chases her before capturing her naked.

This chapter was first released on June 20th, 2016 in Magazine Special #7.

This chapter was not adapted into the anime adaptation and is exclusive to the manga series.